Lantau’s teenage indie-folk outfit the Folk Ups farewell their home fans tonight as they move on to the next stage in their careers.

They’re not moving to LA. Having just completed high school,  Ryan and Jasmine are going abroad to study.

In their brief time as a duo they’ve built an impressive resume, thanks to Jasmine’s golden voice and Ryan’s melodic, well-constructed songs.

They’ve done more than 50 gigs, including Clockenflap and Rugby Sevens and have recorded half a dozen of their own tunes. They released their second EP, Shelby, just two weeks ago (available for free on Spotify and Bandcamp).

The pair spoke to Lantau News in Mui Wo this week.

Do you both live on Lantau?

Jasmine: I was born in Thailand, lived there until I was ten, and then moved to Malaysia. I came to Lantau seven years ago.

Ryan: I grew up in Lantau and I’ve lived in Mui Wo for ten years.

How did you get together?

Jasmine: We met at school – YMCA in Tung Chung. We were in the same class. I don’t remember how exactly but somehow we found out we each did music and we started playing together. Then we won a school talent contest.

Where was your first gig?

Jasmine: It was in a doorway at the school in front of about 50 people. I was so nervous. It was a promo for the talent contest – I don’t know why because everyone had to attend.

Which was your biggest gig?

Jasmine: Clockenflap last year. We played on the Sunday morning. We met Lucy Rose and Shura and got to eat the catering. It was great.

Describe your song ‘Red in the Sky’?

Jasmine: But you don’t find out until the end

Why the farewell gig?

Ryan: I’m off to Ireland to study music.

Will you play together again?

Jasmine: We have two more gigs this weekend (Comix Home Base in Wanchai and Island Bar in Lamma). After those we aren’t sure if we’ll play again but we will try to collaborate and make more original songs. 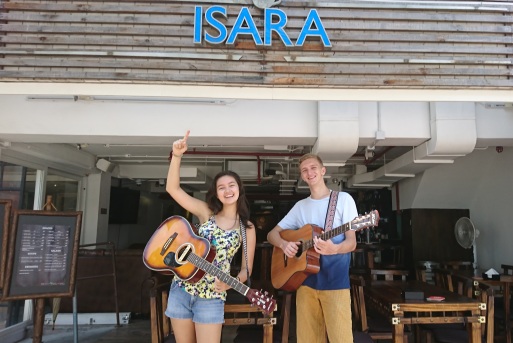 Where: Café Isara, Mui Wo