Zhang Dejiang’s short visit (or inspection) has told us that Lantau is not just a big deal in Hong Kong. It’s a pretty big deal in Beijing, and an even bigger deal for CY Leung’s reelection (or ‘reelection’) strategy.

The Development Bureau was the first place on Zhang’s official agenda, which soon became well-known to Hong Kong thanks to this photograph of the VIP inspecting this hefty 3D visualisation of the Lantau plans:

END_OF_DOCUMENT_TOKEN_TO_BE_REPLACED

It seems even the boosters of the Hong Kong-Zhuhai-Macau Bridge don’t think it will help the local tourism industry.

The SCMP has run two slightly panicked pieces on the pending opening of Shanghai Disneyland and just how badly that might hurt our own temple to the Mouse.

A long feature on Saturday asked if the two cities can “share the spoils?”  Yet in the hefty list of compelling features at the local Disney site – we’re talking Iron Man Experience and Fairy Tale Forest here – no one has thought to mention the bridge.

END_OF_DOCUMENT_TOKEN_TO_BE_REPLACED

Industrial accidents on the Macau bridge project have killed six workers and delayed the project by more than a year, according to local news site HK01.

The Highways Dept has attributed delays to labour shortages and the uncertain supply of materials, but the rising toll of injury could be the biggest factor of all.

According to HK01, the project has been shut down as a result of injuries and safety issues for 439 days. As well as the six deaths,  129 workers have been injured since construction began in 2011. END_OF_DOCUMENT_TOKEN_TO_BE_REPLACED

More evidence that the HK-Macau bridge is shaping to be an even bigger disaster than the other budget-busting SAR mega-projects.

Howard Winn (the former SCMP Lai See editor) reports that in the rush to get the project completed the Highways Department has been cutting corners. It’s been trying to construct the border crossing on reclaimed land that is not yet ready for construction.

“The problem is that once again Hong Kong has allowed itself to be bullied into building this too quickly”, said one experienced engineering consultant. In the past Hong Kong has left reclaimed land to settle for between 5-15 years before building on it. “The problem with the [border crossing] is that it hasn’t been left long enough and it is still settling.” Engineers are still considering what do about the problem.

END_OF_DOCUMENT_TOKEN_TO_BE_REPLACED 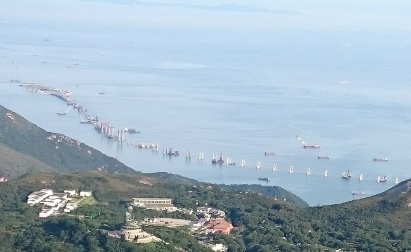 C.Y. Leung’s visit to Zhuhai last week confirmed what has been apparent for months – the grand project to build a bridge across the Pearl River mouth is so far off schedule no-one can say when it will be finished.

At the start of the year the 50-km bridge was slated to come into service by the end of 2016 as originally planned.

In January the government took a request to LegCo for an extra $5.46 billion, and acknowledged it was waiting on a fresh analysis from the Highways Dept to give a revised timetable.  Officials had no trouble in finding reasons for the spike in budget: the high number of construction projects, machinery costs, rising wages, the environmental assessment, the delay caused by the 2010 judicial review and the cost of the new immigration facilities.

In March the head of the Guangdong Development and Reform Commission, Li Chunhong, told the SCMP that construction, which began in December 2009, may not complete until after 2020:

The bridge was scheduled to be completed next year, but Li said even 2020 was a difficult target because of technical difficulties in laying sections of tubes on the seabed and joining them to make a tunnel.