Industrial accidents on the Macau bridge project have killed six workers and delayed the project by more than a year, according to local news site HK01.

The Highways Dept has attributed delays to labour shortages and the uncertain supply of materials, but the rising toll of injury could be the biggest factor of all. 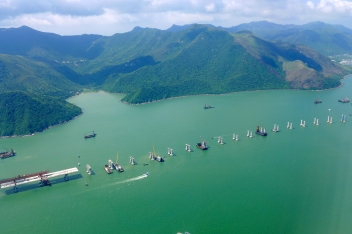 According to HK01, the project has been shut down as a result of injuries and safety issues for 439 days. As well as the six deaths,  129 workers have been injured since construction began in 2011.

In the longest closure, reclamation work for the future bridge landing facility next to Chek Lap Kok was shut down for nearly three months.

A leaked safety report report from state-owned construction company, China Harbour Engineering Co., the main contractor on the reclamation work, found a series of safety issues, including the lack of protective fencing and repeated mechanical failures.

In a monthly report last June it recorded that two subcontractor firms had failed the safety audit, scoring below 50 points.

A separate issue is the apparently poor quality of concrete used in the reclamation. The concrete has been used because of the shortage of large rocks but is prone to chipping.

A Highways Department spokesperson said the accidents “do not necessarily have a great impact on the overall schedule.”

The bridge, originally due to open in early 2016, has been plagued by delays, including shifting foundations which could put back the opening of the border facility by five years. The current opening date is late 2017.