David Kam, a 13th generation resident of Luk Tei Tong, has seen more change in Mui Wo than all of his ancestors together.

When he was born in 1944, Lantau had no roads, no ferry to Central and no telephones. Villagers raised cattle and grew rice as they had done since the area was first settled nearly a thousand years ago.

In a history of Mui Wo he co-authored and published last year, David describes Lantau as “a self-contained kingdom.”

He reminds us that it is a collection of 20-odd villages, many of which we know today – Chung Hau, Pak Ngan Hung, Tai Tei Tung and so on. Of these David says Luk Tei Tung is the oldest, with a heritage of 400 years.

Mui Wo’s history goes back even further than that. It was a site for salt production as far back as the Song times. Salt production stopped centuries ago, but the pans remained until the remaking of the old township in the 1980s.

Legend has it that the last Song emperor was crowned in Mui Wo. Though that is likely myth, the imperial court, on the run from the Mongol invaders, spent several months on Lantau and descendants of some of those courtiers live in Tung Chung villages.

“As far as Hong Kong people were concerned, the islands included only Cheung Chau and Lantau, and Lantau meant Mui Wo,” David says.

The Mui Wo that David grew up in in the 1950s was a different universe. He was born towards the end of the Japanese occupation, when the only transport connection was a kaido to Cheung Chau.

He had one pair of shoes that he would wear only when at school; he would take them off on the journey to and from home.

His spare time was taken up with work on the family farm. His would tend the family cattle herd, seeing see them off to the mountains in the morning and back down again in the afternoon.

The ties between the humans and their cattle were strong, David recalls. When he was seven years old, his mother decided to sell the family bull to a farmer from Cheung Chau. But when the buyer arrived, she swears she saw a tear in the bull’s eye and changed her mind.

Change came slowly to Mui Wo, and then in a rush.

South Lantau’s first road was built in the 1950s – basically the same coastal road today that connects Mui Wo to Shek Pik. In the early ‘60s it was extended all the way to Tai O as part of the Shek Pik Reservoir project.

It was the dam, not the road, that had the bigger impact. It dried up the flow of Mui Wo’s three rivers, making wetland rice farming impossible. Villagers turned to melons and other fruit.

But those were still good times, David recalls.

“The 1950s to the ’80s were probably Mui Wo’s golden years. Post-war development was fast. It was a self-sufficient era. Farmers were growing crops, fishermen were catching fish.

“In the mornings near the Five Cent Bridge the fishermen would sell their catch and gather for breakfast. There would be barbecue under the famous banyan tree.”

The big changes came in the 1980s, when the government tore down the stilt houses on Silvermine River and built public housing on Ngan Kwong Wan Road.

The Chung Hau market stores – now the site of the playground and the hotel – that were the centre of commercial and social life were also demolished. The salt pans disappeared under the government building and wet market. 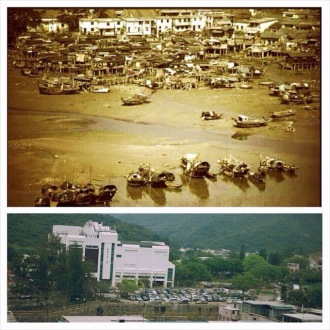 Then in 1998, the Tung Chung line opened. Villagers continued to move out and city people coming to Lantau headed first to Tung Chung, forgetting about Mui Wo.

David is disappointed by the current development plans for Lantau, which he thinks overlooks Mui Wo. He has his own vision for Lantau development, involving major reclamation of the sea between Chi Ma Wan, Mui Wo and Hei Ling Chau.

“Since the MTR line opened, the mythology of Mui Wo has disappeared,” reflects David. It’s no longer the front door. “Lantau is now Tung Chung, Ngong Ping and Chek Lap Kok.”