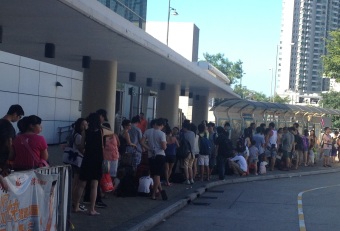 The good news is the Islands District Council agrees that we need more blue taxis.

The bad news is that the council has had no luck in persuading the Transport Dept, despite multiple requests.

The bad news is it has no timetable for doing so.

So in the short-term there won’t be any change in the Lantau taxi situation. With tourist numbers continuing to climb, it will probably get worse.

But it’s significant that the DC has an active interest in the issue (I stand corrected on my previous post). Andy Lo, chairman of the transport committee, who responded to my inquiries, and Bill Tang, a member of both the DC and LegCo, agree that taxi supply is not meeting demand, in particular on holidays. Tang actually raised the matter in LegCo in February.  The DC doesn’t make decisions but is a respected channel to the government.

What’s more, in cases like this government officials are vulnerable. The service is so clearly short of what it should be, the level of abuse so obvious, and the inability of the taxi company to mount a defence is so revealing that sooner rather than later the Transport Dept will have to act.

It’s up to Lantau taxi users to log their complaints. You can do that on the Lantau Taxi Shortage Facebook page and also through the government 1823 complaints hotline (ideally both). For those who don’t know, 1823 is a phone number, a web page and an iOS or Android app. All complaints are guaranteed to land in the Transport Dept.