Public consultation (or ‘consultation’) on Lantau development is in its final week. On recent evidence it is difficult to believe it will make a difference.

This blog has attended two public forums on Lantau in the past fortnight – one at Hong Kong University and the other one at Pier 8, Central. The way these work is that senior officials turn up, take notes and occasionally answer questions while people tell them what they’re doing wrong. Then they go back to their offices, tick the ‘consultation’ box and life goes on. 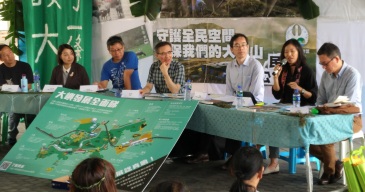 Exhibit A for Lantau is the four years of consultation over the Shek Kwu Chau incinerator that yielded exactly zero changes to the original plan. END_OF_DOCUMENT_TOKEN_TO_BE_REPLACED

If you’re feeling limited by Lantau’s lifestyle choices you now have a new one – opulent living.

Not one but two high-end housing developments have come on the market in the last six months, exemplifying perhaps South Lantau’s transition from sleepy backwater to development hot spot.

Kelly Merrick from Home Solutions kindly took Lantau Confidential for a tour of White Sands early this month. From her perspective it’s the arrival of much-needed new inventory. “There’s been nothing like this previously on Lantau,” she said.

END_OF_DOCUMENT_TOKEN_TO_BE_REPLACED

On my last visit to LegCo the taxi driver thought it was the High Court and proceeded up the hill past the Shangri-La. He was ex-mainland, but these days you can almost understand the confusion.

This journey was to make my contribution to the waste management ‘debate’. Hong Kong citizens have the right to directly make their argument on issues to an appropriate LegCo committee, in this case the Environmental Panel (wondering: can we do this for the electoral reform bill?). I’ve been thinking about whether this is an admirable exercise in pure democracy or a complete waste of time, but I’ve had to come down in favour of the latter.

END_OF_DOCUMENT_TOKEN_TO_BE_REPLACED

Hong Kong suffers from bad decisions because of our dysfunctional system.

In particular, it encourages grandiose public works in favour of long-term problem-solving. Officials have come to regard capital works as a salve to any of our problems because it is virtually cost-free financially, politically and professionally.

From the Stonecutters Bridge to the Kai Tak Cruise Terminal, the territory is littered with lightly-used boondoggles. We are right now well-advanced in building a road-only bridge across the Pearl River that will cut travel time by just 15 minutes. While other cities are building cycle paths and pedestrian walkways, we are unique in expanding the road network.

So it’s no surprise that we are late in tackling the issue of waste. From personal experience, I can attest that Taipei City was collecting recyclables from all residents 17 years ago. But in Hong Kong there is little reward for reducing our mountain of waste and more importantly no penalty for not doing so, just as there is no penalty for not cleaning up the air or failing to provide affordable housing. END_OF_DOCUMENT_TOKEN_TO_BE_REPLACED

Running around Chi Ma Wan peninsula last year I noticed a bunch of apartments on the shore below. Not knowing the epic importance of the dwellings, I took this photograph from just the other side of the point. 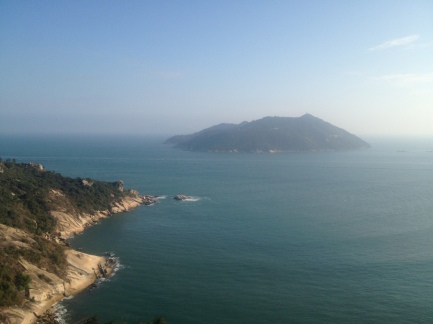 That’s pretty much the same stunning view as residents get daily. Who wouldn’t want a part of it?

The answer is, no-one.  Even in land-scarce Hong Kong.

The place is called Sea Ranch. Built some 20 years ago, it has entered Hong Kong legend as a semi-deserted ghost village. Not quite on the same scale as Skyfall‘s Hashima Island, but important enough to rate a mention in Time Out‘s ‘Secret Hong Kong’.

The awkward location and lack of transport links have doubtless contributed to the exit of owners and tenants. At $732 per square foot it is surely Hong Kong’s best-priced accommodation (thanks, Big Lychee). That’s six times less than the South Lantau average of $4,704 for November.

But what’s that smack in the middle of the foreground? Yes, Shek Kwu Chau, the government’s favourite location for super-incinerator and wharf, promising the arrival of 3,000 tonnes of garbage daily and likely toxic emissions. No wonder it’s been abandoned by the market.

Like Loading...
The super-incinerator is back – not that it was ever completely canned – and in fact is inevitable, according to Environment Under-Secretary Christine Loh.

But there’s good news as well bad news in the remarks by the former head of Civic Exchange, who has taken on board some lessons of the Shek Kwu Chau debacle.

First, she’s proposing a holistic approach to the city’s waste problem, rather than trying to solve it with a boondoggle.
Second, she promises the government will seek the best technology, and in fact was dismissive of what she termed the “dioxin-spewing” SKC facility.
Third, the government is a long way from deciding where any future incinerator will be built.
Loh said following CY Leung’s policy address last week, which had called for “an integrated waste treatment system,” the department would issue a waste management blueprint by the end of March.

We want to put all the things that HK has to do to have a modern waste reduction, waste separation, recycling, treatment, whether it’s incineration treatment technology as well as landfill. We want to put it on one piece of paper so that everyone can see what has to be done and why and when we might need to take certain decisions.

The paper would canvass what incineration would involve and “when do you have to do it, what kind of size do you really need, and people can have a chat about what different technologies are out there,” she said.
Loh said the government seek advice from experts on waste technology, and not just those who are selling the equipment.

The idea is that whatever technology we go for in the end, it’s going to be waste-to-energy, a much more updated scheme.

Bottom line is that Loh has pretty much completely reset the government’s waste management policy. You’d think her more considered approach makes it harder for proponents of Shek Kwu Chau, which was a fail on cost, technology, environmental impact, location and policy-making grounds.

But those have never been obstacles before, so let’s watch this space.

UPDATE: Here’s the audio of the Backchat session.