From now on Cheung Sha, Tong Fuk, Shap Long, Ham Tin and Tai Long Wan are among 29 beaches that will be serviced by Marine Department cleaners.

Pui O, Fan Lau and Tai O on Lantau’s south and western coast, and Sam Pak Wan and Nim Shue Wan near Discovery Bay, were already on the list.

The Environmental Protection Department updated the list of coastal sites based on “factors including cleanliness, the amount of refuse collected, cleaning frequency, geographical and hydrodynamic conditions, public accessibility, ecological value and concerns raised by the public,” a government statement said.

A dozen beaches were dropped list because of “sustained improvements in their cleanliness,” the statement said. 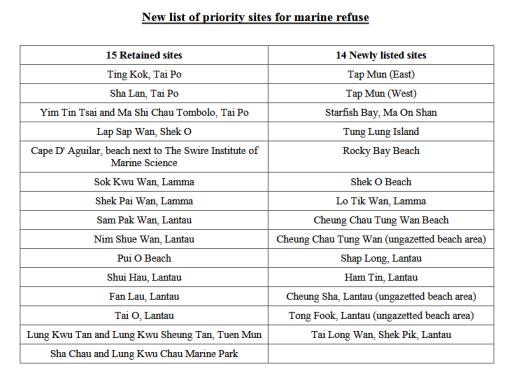 Cleanup operations on the priority beaches have increased 50% since the list was created two years ago, the government says.

It says Hong Kong is now working with 13 cities in the Pearl River catchment to monitor real-time rainfall data to help predict which beaches might be hit with heavy volumes of marine rubbish.

A notification system has been activated seven times.

The Marine Department’s contractor has been operating 80 scavenging vessels to clean up floating refuse in Hong Kong waters since October.

The contractor’s fleet includes six new quick response workboats and two scavenging catamarans equipped with mechanical devices to increase the efficiency of clean-up operation in narrow water channels and to enhance scavenging service in offshore waters. In addition, the number of foreshore cleaning teams has been increased from two to three in order to step up efforts in cleaning up the foreshore areas.