Yet more of the Pui O wetlands is under threat of disappearing.

A landowner is seeking to turn more than 400 sq metres of wetland into agricultural land.

Already an area of approximately 150 sq metres has been covered with landfill.

Although the wetland is officially designated Coastal Protection Area (CPA), that offers no protection.

Under the city’s baffling planning and environmental laws, it can only be protected if it is zoned for development.

Just as inexplicably, the Environmental Protection Department (EPD) can give the go-ahead for landfill. A notice on the Pui O site indicates it has EPD “acknowledgement.”

The owner also has applied to the Town Planning Board (TPB) for permission to change the land use to agricultural.

Michael Lau, director of wetland conservation at WWF-HK, says he has reported it to the EPD “as yet another example of illegal landfilling about which they appear completely unable to do anything.”

Local environmentalists point out that the EPD notice appears to have been erected after landfilling began.

They also express surprise that the EPD has taken the step to approve the landfill while a judicial review (JR) is underway questioning that power and the way it is exercised.

The JR, filed two years ago, has been completed but the judge has yet to deliver a decision.

Additionally, if this part of a conversion to agricultural land, the landowner appears to be in breach of zoning regulations by having begun before the application is approved.

It is the latest of a series of assaults on the Pui O wetland, which is not organic wetland but is abandoned farmland that has been regenerated by the presence of water buffalo.

The buffalo now find their habitat is disappearing, as landowners dumped waste, carried out landfill, converted to farm land or fenced-off wetland areas. 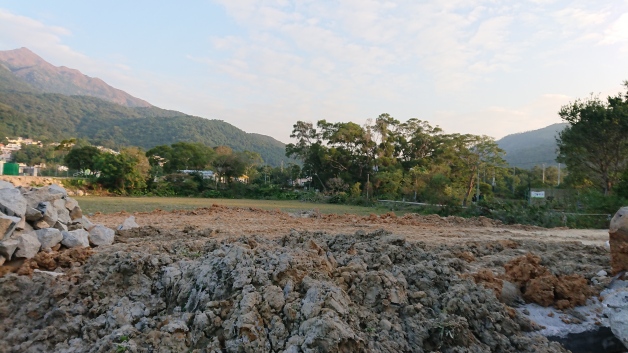 It is made more complex because most of the land is held by private landowners.

There is some support from rural leaders for a land-swap, in which the government would exchange equivalent land for the wetland plots.

But the first such land swap was completed in June in Sha Lo Tung, a dragonfly breeding ground and an area described of “high ecological importance.” Yet that involved a single landowner and still took a dozen years to complete.

In her September policy address, Chief Executive Carrie Lam flagged up “conservation initiatives” in Pui O and other Lantau villages, but gave no specifics.

Those wishing to object to the landfill and conversion of wetland can object to the TPB or write to the Lantau officer plyau@epd.gov.hk  or Robin Lee, head of the Sustainable Lantau Office robinkblee@cedd.gov.hk.