For the record, a couple more banners next to the Mui Wo ferry pier.

Resident Ben Sargent commented on my earlier piece that banners calling for the redevelopment of Chi Ma Wan prison are up in the Ham Tin/Pui O area. So whoever is doing it is reasonably thorough. And also, you’d have to say, a touch conspiratorial and counter-productive.  What’s the point of making an intervention in local issues if you’re not going to identify yourself?

As posted earlier, one resident claims to have seen former local District Councillor Rainbow Wong and a team putting up the banners in Pui O.

There is no sign the banners have been approved by the Lands Department. Local environmental activists say they must apply months in advance to get just a single banner space.

For what it’s worth, I’ve done a quick analysis of the 12 banners, including the two below. Conclusion:

Support Lantau Development: We strongly demand an increase in the number of Mui Wo parking spaces. 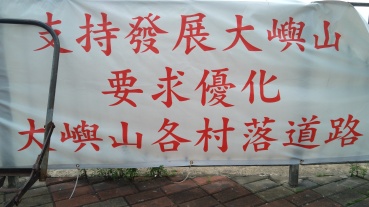 Support Lantau Development: We demand the improvement of roads to every Lantau village.